Miyu (美夕) also known as Miyu Yamano (山野 美夕 Yamano Miyu), is a beautiful girl who appears to be 13 or 14 years old but in fact is much older, being a vampire. Even though she is a vampire, Miyu isn't harmed by sunlight, holy water or crucifixes, and her reflection can be seen. Though she does need to drink blood to survive, she chooses her 'victims' carefully. She chooses people who have suffered a tragic loss, and offers them their greatest wish – to be with their lost loved ones, - at least in their dreams – in exchange for their blood. These people live an endless dream state forever.

In the OVA, she is the child of a human father and a vampire mother in post–World War II Japan. In the TV series, on the other hand, her mother is human and her father is a Shinma guardian in pre-World War II Empire of Japan. In both cases, Miyu becomes the Guardian (also referred to as the "Watcher") after losing her parents.

When Miyu was about 14 years old, she found out that her father was a Shinma from her human mother. (Prior to that, she was told that her father died but kept in conviction that both of her parents were human.) Depending on the version as Manga, Ova's and TV series, Miyu either herself wanted to know the truth, or came to know it when the time of the awakening came. The fate of her mother is also different depending on the medium as in TV or Ova's both her parents are killed while in the manga her mother merely forgets about Miyu's existence, while most other people generally do forget about Miyu's existence as she loses her status of a human. This leads Miyu to consider her fate as more of a curse. She often feels incredible sadness and loneliness prior to meeting Larva (Lava).

Miyu has a beautiful and youthful appearance since she is a vampire. She has brown hair, golden pale eyes, pale skin and red lips (in the manga). When in her vampire appearance, Miyu is always barefoot (though her right foot has a ribbon-like wrapping around it) even in the snow as she doesn't get cold.

In the OVA, she is seen to wear different clothes in every episode she appears in. For example in the first OVA, she wears her typical short kimono that is familiarized by all fans. In the second OVA, she wears a uniform during her stay at school and wears a bright red yukata when speaking to Himiko and confronting Ranka. In the third OVA, she wears a winter kimono, which seems to cover her body more than the other two garments. Finally in the fourth OVA, she wears a very heavy black kimono and also wears a mask. However in the TV series, she only wears two types of clothing: the typical uniform and the kimono known by all fans and that is shown on box covers.

In the TV series Miyu is shown with a more matured personality, while in the OVA's she is often depicted as childish and a bit creepy, enjoying and playing with human lives. In all mediums, she never wishes any humans harm and while she often may appear a bit hostile in the OVA's often taunting the human characters or her enemies, this could be considered a preventive strike, she's often very dependent on Larva and in the OVA's she did cry and panic when he was captured. In both TV series and OVA's,she experiences a terrible mental breakdown when her relationship with Larva is threatened. She does show impatience to people who disrespect them and might ignore or amuse herself with people trying to catch her. While she never kills any human, she does not stop humans killing themselves via their own ignorance. She might however warn them of the risks of their action, like in the first episode of the TV series where she warned the ignorant boy to not to follow her, obviously offended by the boys stereotyping her as a classical vampire, though she was willing to befriend him or was simply using his expertise on a case she worked on. In the manga she posses as a sweet caring personality often visiting humans whom she captured and in all series its also considered as a coping mechanism as she's depended on and willingly gives blood. 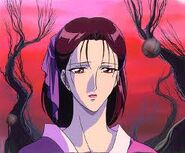 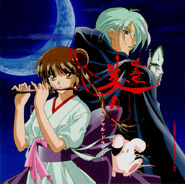 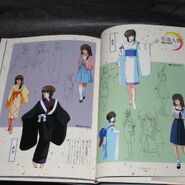 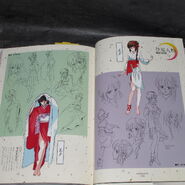 Add a photo to this gallery

The relationship between Miyu and Larva is a weird and yet beautiful part of the story. As Miyu says, Larva is her "soul servant and friend". Ever since she's been given the task of returning stray Shinma to the Dark, Larva is always with Miyu helping her by fighting with his sharp hands.

Miyu's task may take centuries. And she may not be able to resist if it weren't for Larva. He's the one whom Miyu shares her secrets with as well as her sorrow. She thinks about Larva as her servant, her only friend and possibly her lover.

They met each other when Larva came to Japan in order to kill her. They continued fighting until Miyu was hurt by Larva's sharp hands. Larva thought that he had kill her but this only made the awakening of Miyu as a vampire, so she bit him and drink his blood. However, Larva was reborn, for Miyu's immortal blood mixed with his own. From that moment, they've been tied together by each other's blood. It was then when Larva found out about Miyu's cursed fate. Knowing her sadness, Larva freely chose to be forever at Miyu's side. He also received the same power as the Guardian's.

Miyu asked Larva to look after her life. If she should ever want to run away from her destiny, then Larva would end her life.

They have shown great concern for each other and mutual love feelings. In the manga series, they even kiss.

Retrieved from "https://vampireprincessmiyu.fandom.com/wiki/Miyu?oldid=4598"
Community content is available under CC-BY-SA unless otherwise noted.